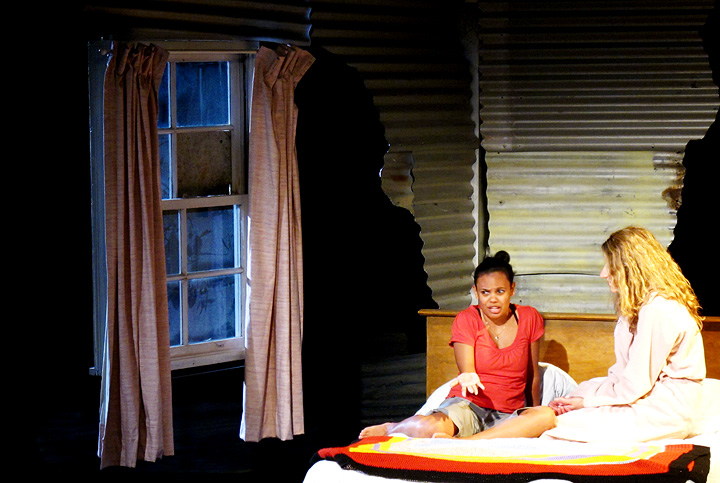 MOTHER’S TONGUE is a contemporary Indigenous story about David and Ngala, a brother and sister trying to find their way in life after the death of their grandmother, the keeper of secrets and last custodian of the knowledge of a whole language group.
After her death, David is the only person left alive that can speak his mother’s tongue. With Ngala wanting to learn the language, David wanting to move on with his life and a sexy new female arrival in town starting to stir things up, life for David and Ngala just got complicated. What follows is a tale of trust and betrayal, love and lust.

The play is set in a coastal regional town and the indigenous characters have a personal link to the ocean through their mother and language. Therefore the ocean had to be a feature of the design but evoke a sense of the characters isolation and psyche. We chose to have half the stage as ocean, represented by sheets of painted corrugated iron floating and curved upright, receding into the distance. The ocean was bordered by sand and surrounded the flexible interior living space. The walls of the house were broken away corrugated iron sheets that became the represented pieces for the ocean